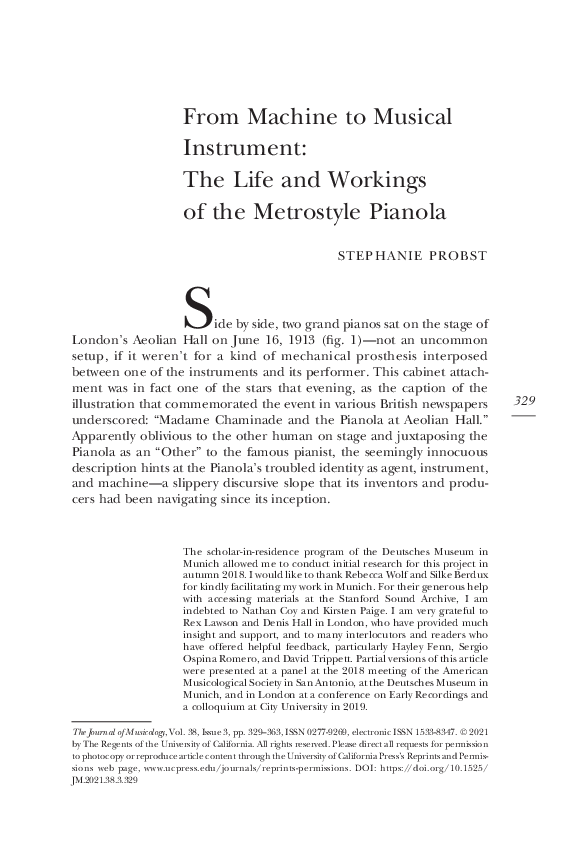 From Machine to Musical Instrument

The Life and Workings of the Metrostyle Pianola

Media histories of music often frame technological innovation in the early twentieth century within a general zeal for automated musical reproduction. The engineering efforts of the Aeolian Company and its Pianola counter such narratives by fostering active music-making rather than passive listening. As a pneumatically powered attachment to a piano, the Pianola was initially limited to reproducing strictly mechanical renditions of music from perforated paper rolls. But the invention of the Metrostyle in 1903, a hand lever to achieve tempo-specific effects, significantly refined the musical capacities of the instrument. It allowed for inscribing onto the music rolls authoritative performance instructions that could be enacted by the player. Revisiting the various places that the Metrostyle Pianola inhabited, from the manufacturing site to the concert hall and the bourgeois living room, I illuminate the different sociocultural relationships and musical experiences that it mediates. By relegating certain tasks of conventional piano-playing to the mechanical workings inside the instrument, the Pianola was marketed as facilitating simplified music-making in ever wider parts of society. The Metrostyle annotations served as a pedagogical device for instructing novice players in principles of nuanced and tasteful interpretation. My analysis exposes the reciprocal relationships between the instrument and its human players, from attempts to adapt the physical interface to human physiologies, to the ways in which the instrument, in turn, imposes certain mechanistic affordances on its players. Citation: Probst, Stephanie (2021). "From Machine to Musical Instrument: The Life and Workings of the Metrostyle Pianola." Journal of Musicology 38 (3): 329–363.

From Machine to Musical Instrument
The Life and Workings of the Metrostyle Pianola
Probst, Stephanie